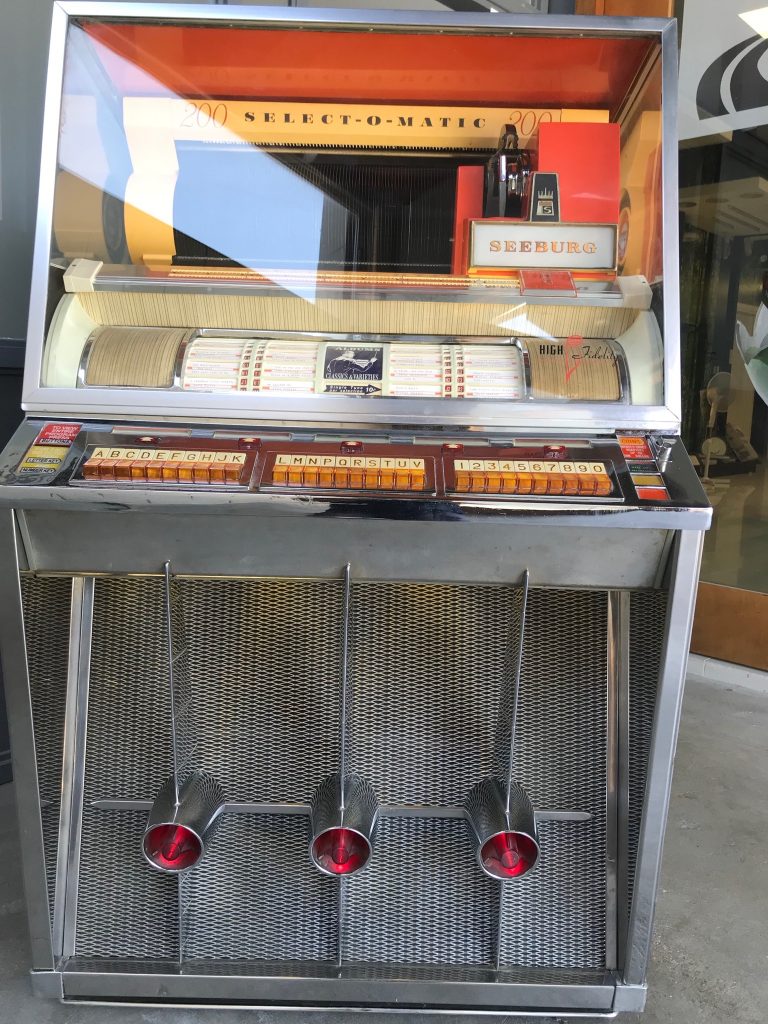 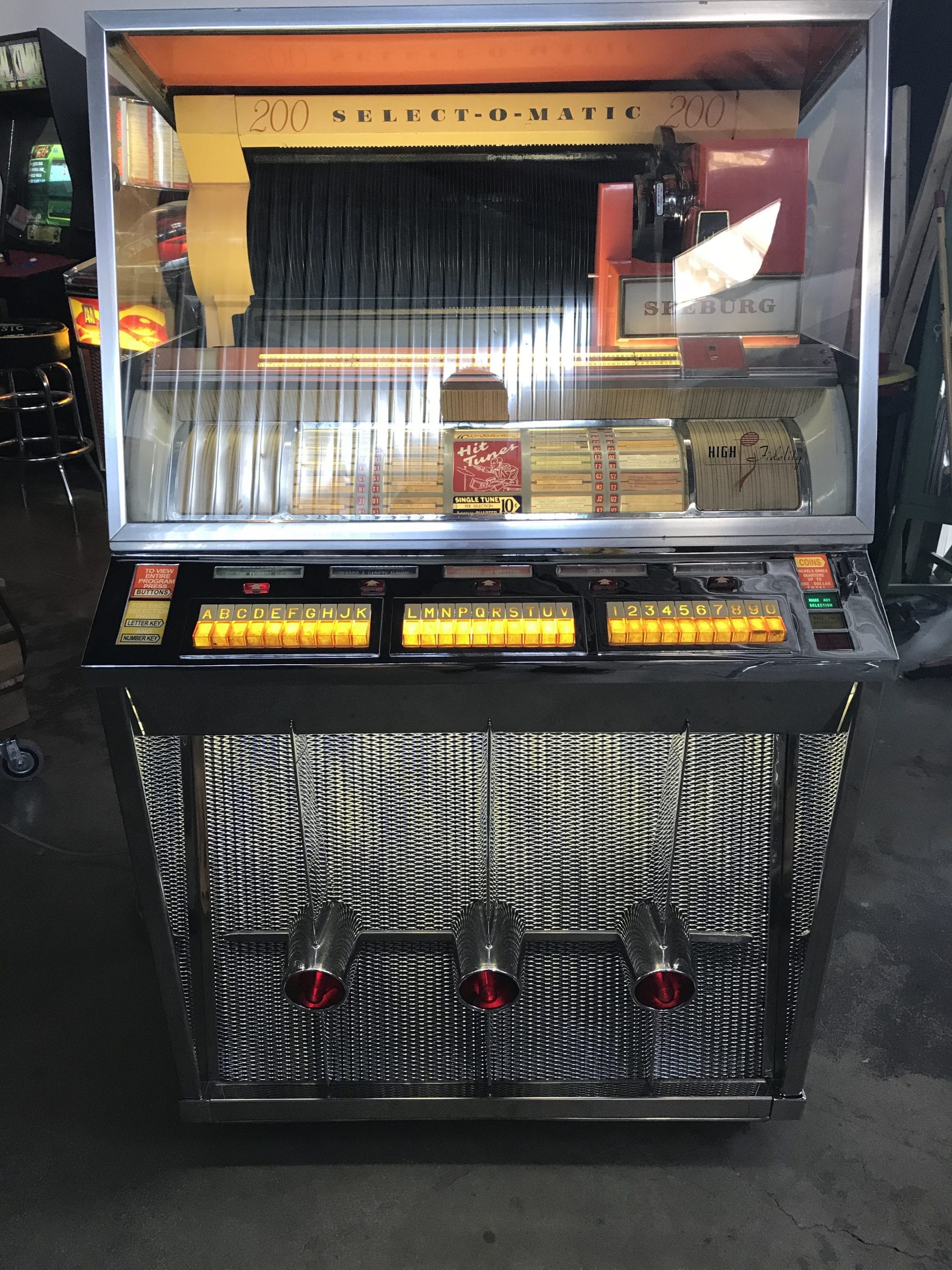 The cabinet styling was a dramatic change from previous models in that „rounded“ corners gave way to squared off ones.  The fascination of a rotating title drum was retained from those of the V and VL models just prior as was the infailable Tormat Memory System and the  „Red Head“ Pickering cartridge.

Especially since the introduction of the world’s first 100 selection jukebox in 1948, Seeburg was considered the brand to emulate.  Their technical innovations led the way over the years and culminated in the introduction of the first commercial CD jukebox in 1986 aptly named The Crusader. Seeburg is known as the „Rolls Royce of the jukeboxes“. They were built in heavy duty quality, do not ruin the records inside and have an extraordinary sound.

Seeburg wasn’t afraid of taking chances either.  They came out with the first 45 rpm jukebox which forced jukebox operators to throw away their thousands of shellac 78s and replace the same songs with the new vinyl 45s.

Of course in 1986 they forced the operators to toss their 45 library and go CD or be left behind.  They even tried to get customers to use only paper money.  Coin acceptors were optional for the operator to buy.

There were other things Seeburg did that weren’t readily accepted by operators such as the first jukebox in 1982, the VMC, that had a video screen instead of paper title strips.  Now the person who went out and changed records at the bar had to know how to type titles in a dark room full of drunks … er persons.

And they had thought it was bad enough when transistors took the place of audio tubes in 1959.  Were these „changes“ ever going to stop coming?

You have to understand that operators are a very different breed of persons.  They’d like to be able to place a jukebox in an establishment and then once in a while change a few records as they were collecting half the „cashbox“ contents. CHANGE was not in their blood.

When Seeburg introduced the K series and its little sister the L100 in 1957, operator eyebrows raised just a tad.  Sure the styling was fresh, but these new models had printed circuit boards instead of hard wires in both the amplifier and selection receivers.

For a variety of reasons, these advances didn‚t go over well with operators and so Seeburg reverted back to hard wires with the next year’s models 161 and 201.  But do you think that blip in operator confidence fazed the R & D departments at 1500 North Dayton in downtown Chicago?  Hell no!

In 1962 with „solid state“ they completely eliminated audio tubes and wires in the amplifiers of the stylish new Low Profile Consol LPC-1.

Of course we’ve rebuilt everything about this wonderful machine.

What made this K series jukes stand out was the three vertical „finned“ tail lights in the grill / speaker area which closely resembled those on a ’57 Chevy.  We don’t remember if the taillights made these jukes stand out any more than other jukes placed in bars and restaurants, but they make a tremendous difference today.

This particular KD 200 is extremely clean with lots of original parts as well as great new chrome.

So lay down some black and white tiles, lay out some cold cash and acquire this beauty for someone you love, even if it’s yourself. 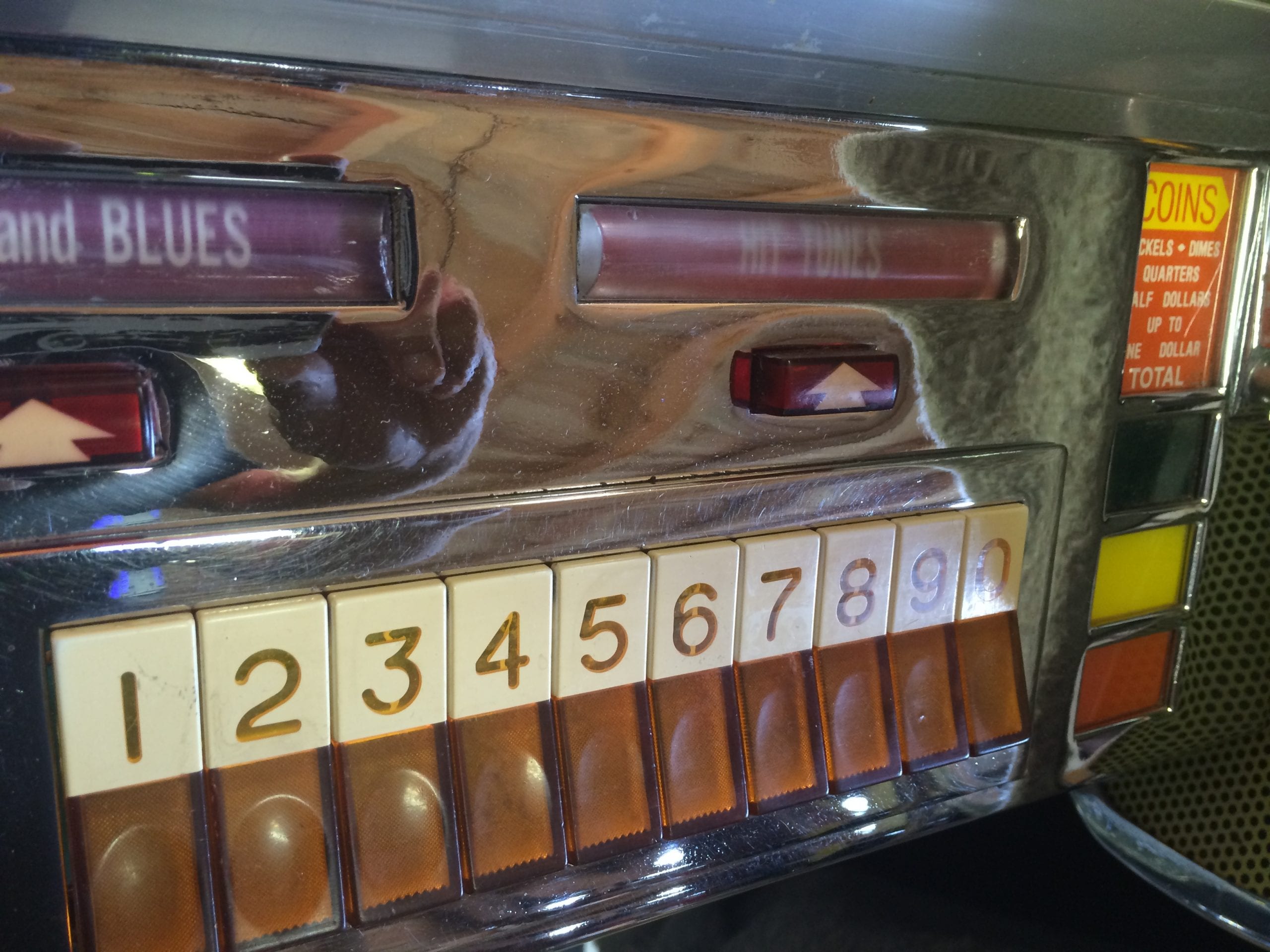